BACK
Back to top 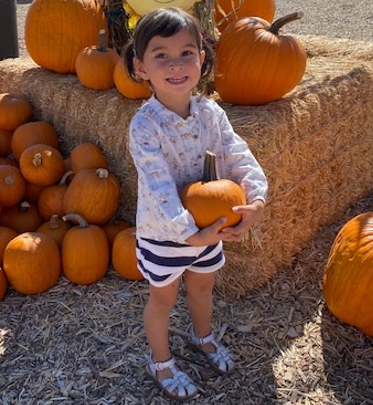 It's just about time for pumpkin everything! Try planning ahead this year to ensure you make the most of your holiday décor.

On a trip to the grocery store this week, my 3.5 year old yelled "Pumpkins, mama!! Can we get one please?!".

Since it was the last week of September, I let her choose from the pile of cute, reasonably sized (2-4 lbs each?) pie pumpkins. Once she grabbed hold of a sweet little round one with a bit of a tan rough patch on the back that I had to hold back on pointing out because to her it was perfect, she said "and when we get home can we cook it right away?!". At which point I realized maybe I had ruined Halloween for my baby.

For the past few years, I've been very particular about the kinds of pumpkins we bring home... knowing that ultimately, my plan is to cook and eat them. We often buy pie pumpkins, or ones that I know have a nice thick meat that we can cube and roast, or turn into puree.

Looking back at photos from last year's Halloween, I let some of the parent guilt go and realized that seeing these pumpkins as food doesn't necessarily mean that we missed out on the Halloween fun. In the United States, 900,000 tons of pumpkin produced annually will be trashed, rather than used as food or composted. I'd like to think that we actually enjoyed them even more, considering all the tasty pumpkin flavored treats we were also able to enjoy.

Here's our rough planning process with the pumpkins:

1. Choose pumpkins that are a manageable size for cooking. I tend to go with pie pumpkins that are about 10 inches in diameter and weigh a few pounds at most. They should feel heavy considering how tiny they are (this is how you know that there will be a good amount of meat).

2. When you get them home, decorate them with stickers, googly eyes, craft paper, pom poms, non-toxic paint, etc. Whatever craft or reuse supplies you have laying around that won't involve cutting into the flesh or exposing the skin to toxic chemicals (ie. weird glue or toxic paint).

3. Display the pumpkins anywhere inside the house, or outside if you think they'll be safe from squirrels and other critters. Leave them out for display until you're ready to cook them!

4. I like to cook up our pumpkins in the week leading up to Halloween so that we can have a bunch of pumpkin flavored treats right around the holiday. It makes the week feel extra special and also makes planning meals easy with the theme! 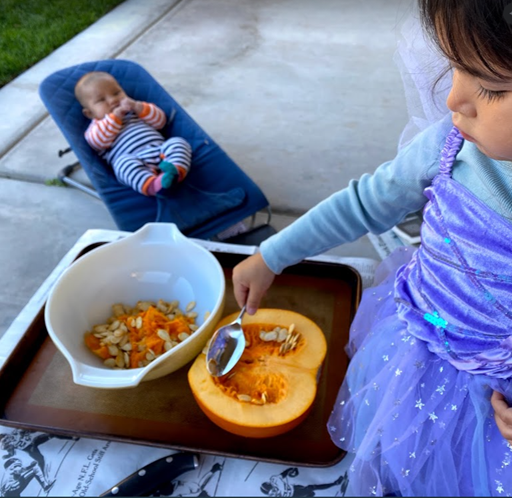 My two favorite ways to cook pumpkin are:

Tip: Try to have an idea of the dishes and treats you want to make with the pureed or roasted pumpkin before you cook them. That way, you can portion it out and put it in the freezer immediately. Or you can split a pumpkin into half puree, half roasted so that you don't have too much to work with. You probably know that pumpkins will last a LONG time if they're uncut, so you can always wait to cook them once the chaos of the holiday has passed!

Some of our favorite pumpkin recipes:

Sign up to get our monthly updates full of tips and tricks to reduce food waste and save money!